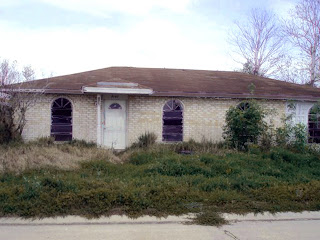 In the suburbs, you forage house to house. If your clothes are dirty or you need a fresh towel, it's a simple matter to break a dead neighbor's window and get what you need. In the beginning it was also possible to find food and useful trade goods, but the suburbs are becoming depleted, forcing survivors to roam farther in the hope of finding a meal.


They were into the first ring of houses now, but most looked like they had burnt months ago. The girls fell silent, walking the empty streets and looking around as if ghosts might be sheltering in the still and watchful remnants of what had once been a typical subdivision. Here they had gone to birthday parties as children, slumber parties at twelve and thirteen, and here they had met friends for football games, dances and pep rallies. They were used to the changes in their own neighborhood, but seeing Quail Heights for the first time since the Telo left them unsettled.

The first intact house they found had been ransacked, as had the second. “This was a dumb idea,” Leila said, shivering even though the afternoon wasn’t cold.

At the third house they found a bag of dried beans, overlooked where it had fallen on the pantry floor and been covered by some paper grocery sacks. “It’ll take all night to soak these,” Cassie said. “But at least we’ll eat tomorrow.”

Leila picked up a silver bracelet, dropped and stepped on in some earlier forager’s departure. She held it up to the light, then placed it on her wrist and fiddled with the clasp. “If we go back now and start soaking them, we may be able to eat tonight.”

Unfortunately, one can never be sure just what one will find in a supposedly empty house. Dead pets and refrigerators of rotting food are just the beginning.

“The last grownups,” Doc said, seeing her wrinkle her nose. “And the kids who’ve died since. Suicide, food poisoning, infections, dumb accidents. . .things like that.”

Cassie didn’t need to be told all the ways young people could die. It hadn’t been unusual in the suburbs to break into a house and find infants dead of dehydration, or to find a teenager who couldn’t bear the devastation rotting in a homemade noose. “Why hasn’t anyone buried them?”

“Who should do it? And where? Some of us tried at first, but the cemeteries are full and it got to be too time-consuming to dig graves in the city parks. Then winter came and we had other problems, like trying to survive.”

But the suburbs do have one big advantage over the urban core.

“I can’t believe I’m on honeybucket duty tomorrow,” Leila said as she washed her face.

“I’m on for Thursday. It looks like everyone but Mundo and the pregnant girl has a rotation, so you can’t say it’s a job that’s not assigned fairly.”

“In the suburbs we could go outside.”

Cassie nodded. In their old neighborhood there had been more options for sanitation, even if it had been harder to find food. “I wonder where they dump the buckets?”

Ultimately, the decision of where to live is a personal one, not easy to make even when the choices are clear.

It was with a mixture of relief and regret that the girls loaded their most necessary items into the Regents’ battered hotel van. It would be good to have the safety of a group and to escape the memories of their suburban neighborhood. Cassie tucked a family photo album into her duffel bag, but it was with the guilty knowledge that she hadn’t opened it in months and would probably be unable to do so ever again.

The Story: Summary and Chapters